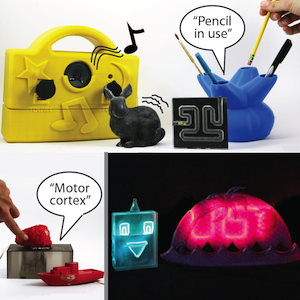 3D printers offer extraordinary flexibility for prototyping the shape and mechanical function of objects. We investigate how 3D models can be modified to facilitate the creation of interactive objects that offer dynamic input and output. We introduce a general technique for supporting the rapid prototyping of interactivity by removing interior material from 3D models to form internal pipes. We describe this new design space of pipes for interaction design, where variables include openings, path constraints, topologies, and inserted media. We then present PipeDream, a tool for routing such pipes through the interior of 3D models, integrated within a 3D modeling program. We use two distinct routing algorithms. The first has users define pipes' terminals, and uses path routing and physics-based simulation to minimize pipe bending energy, allowing easy insertion of media post-print. The second allows users to supply a desired internal shape to which we fit a pipe route: for this we describe a graph-routing algorithm. We present several prototypes created using our tool to show its flexibility and potential.